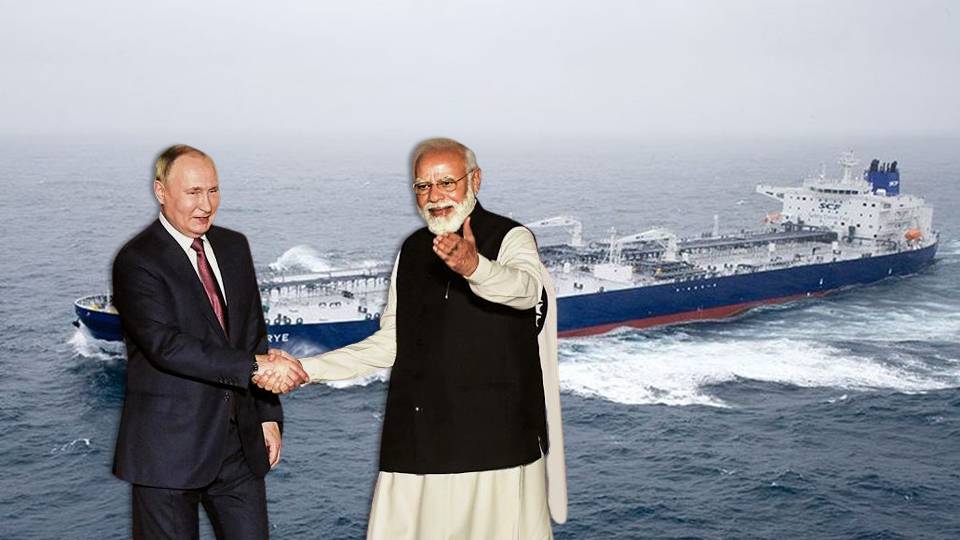 There is not just a physical war is going on in the European Continent, in the background there is also a sanctions war fuelling the fire. Sanctions and Counter sanctions between Russia and its western rivals is just another treat for people wishing to watch another David vs. Goliath battle. Meanwhile, in spite of blocked insurance on oil trade, countries like India are chipping away at them with some heavy gains.

Few weeks ago, Vladimir Putin effectively became a unifier of the European Union (EU) and the United Kingdom (UK). Both geographical entities agreed to impose a ban on insuring Russian oil trade. Interestingly, just like removing their dependence on Russian energy, EU and UK will take it slow and phase out insuring the transportation of Russian oil.

Ships carrying oil and other fuels are commercially are required to have protection & Indemnity (P&I) Insurance. The amount of claim and premium varies according to the areas of the ships covered. In oil trade, the insurance amount is so large that even insurance companies need a reinsurance company to pay for their own liabilities.

Currently, the insurance as well as reinsurance markets are dominated mainly by U.S. and European firms.

Read more: Why is Putin a cult figure in India?

Through assimilating UK under its insurance sanctions fold, EU mainly wanted to block access to Lloyd’s of London insurance market. It is marketplace for heavyweights of marine insurance. Its members join hands to spread risk. Both Corporations and private individuals are part of the market. A senior official said, “There is a level playing field issue if London keeps on providing insurance and then a lot of it goes via Lloyd’s of London,”

For a brief period, the rumours spread that it was all over for Russian oil as well as Indian. Only recently Bloomberg had reported that the cost of shipping Russian oil had increased significantly, touching a 14 year high. The increasing cost of shipping increased risk and henceforth insurance claim as well. In that scenario, the dampener on insurance can easily and logically be interpreted as huge setback.

Putin ready with an alternative

But, years of experience in spying has taught Putin to always have a backup plan, Just after the ban, experts had already started to state that the net result will be negative for European companies as Asian companies will fly to cover the vacated space. Meanwhile, as they gear up, Russia has announced that its state owned companies would act as reinsurers.

According to a report published by Reuters, Ingosstrakh is providing cover to the Russian fleet exporting oil, mainly to India and China. Its reinsurance coverage will be now provided by State-controlled Russian National Reinsurance Company (RNRC).

RNRC’s recent financial activities indicate that the Putin administration had pre-empted the insurance ban by European countries. Just in March this year, Russian Central bank, which controls RNRC, had increased its capitalisation from 71 billion roubles to 300 billion roubles. Its guaranteed capital was also increased to 750 billion roubles.

Dmitry Medvedev, deputy chair of Russia’s Security Council, also confirmed the same. According to an analysis put forward by our sister publication TFIGlobal, on his Telegram channel, Medvedev announced, “The question of insurance of deliveries can be closed through state guarantees in the framework of international agreements with third countries. Russia has always been a responsible and reliable partner, and will stay that way going forward.”

Read more: The Russian Oilonomics and how Putin outfoxed the Western Sanctions

India is providing certification too

Emerging reports also indicate that subsidiaries of Russian oil companies are being provided safety certificates by Indian Register of Shipping (IRClass) as well. Earlier, it was provided by The Russia Maritime Register of Shipping. But, in April, it was removed from the global groupings of such certifiers. The group called International Association of Classification Societies (IACS) provides safety certificates for more than 90 per cent of global shipping cargo.

Indian Register of Shipping (IRClass) has provided certificates to more than 80 ships managed by SCF Management Services (Dubai) Ltd, a Dubai-based subsidiary of Sovcomflot. Sovcomflot is Russia’s largest shipping company, and one of the global leaders in the maritime transportation of energy.

By and large the Oil insurance market is a waste of resource anyway, since the safety standards are so high that rarely any spill over or any other incidents happen. Currently, the only risk with Russian ships is that NATO allies may frown upon it. But, it was only advantageous for European insurance companies. The increased risk meant increased premium. Now, they are losing out on that while Russia and its trading partners like India remain unflustered.