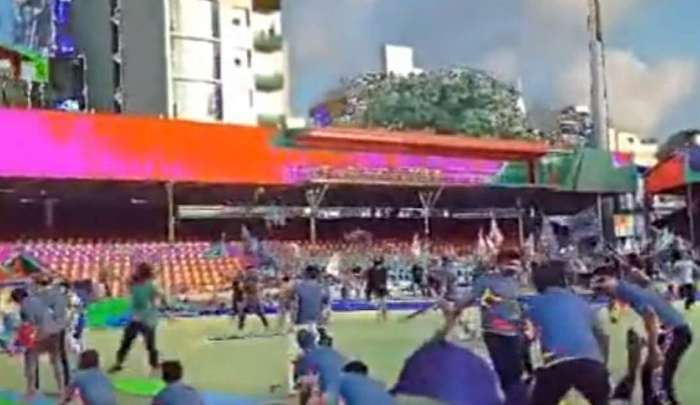 “Earlier, the protesters brandished placards proclaiming that yoga was against the tenets of Islam.”

That justifies all manner of things. “Make ready for them all that you can of force and of warhorses, so that by them you may strike terror in the enemy of Allah and your enemy, and others beside them whom you do not know.” (Qur’an 8:60)

MALE, Maldives, June 21 (Reuters) – Police in the Maldives used tear gas and pepper spray to control a crowd of people who disrupted a yoga event organised by the Indian High Commission, or embassy, in the capital Male on Tuesday morning, an organiser said.

The crowd stormed a stadium where more than 150 people, including diplomats and government officers, were taking part in an event celebrating International Day of Yoga, attacking participants and vandalising the property, one of the organisers, who did not want to be named because he was not authorised to speak with the media, told Reuters.

Earlier, the protesters brandished placards proclaiming that yoga was against the tenets of Islam.

Islam is the state religion in the Maldives, a group of islands in the Indian Ocean with a population of about half a million.