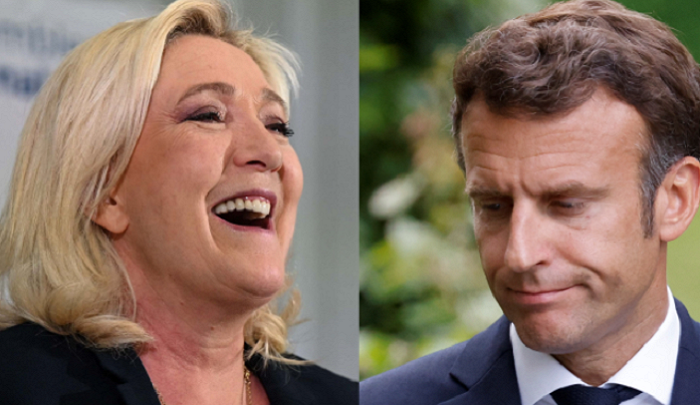 Last week, Macron — sandwiched between the Right and far Left — warned in desperation that “disorder” and “chaos” were the inevitable outcomes in any society dominated by the socialist Left. Yet as I previously reported on the Left Column:

Macron himself is no model of order, given his reckless open-door immigration policies that have resulted in crime surges, jihad attacks and threats, and widespread Islamic antisemitism. Recall also the yellow-jacket riots in response to Macron’s presidency and his economic “reform,” especially gas tax hikes. The Leftist Macron has now found himself beleaguered by his own Leftist camp; his nemeses are further Left than he is. He has also been criticized by the Right, which emphasizes responsible immigration control. Nothing has weakened France more than Macron’s allowance of mass, unvetted immigration, with all too many migrants from Africa and the Middle East bringing nothing but expense and chaos.

France has been noticing.

Although Macron warned about the Left in an effort to score points for his fledgling government, Marine LePen’s party made historic gains, causing France’s parliament to shift more to the right, which potentially sets France on a new direction.  Leftist policies have been the slow ruin of Western civilization for years. Maybe the ship can be turned around before it’s too late.

Roundly rebuking his neo-liberal globalist political philosophy, the French public has refused to grant President Emmanuel Macron a parliamentary majority as Marine Le Pen’s populists on the right and an ecological alliance on the left surged at the ballot box to strip the once self-described ‘Jupitarean’ leader of his ability to govern France firmly.

Just under two months after securing a second term as President of France, Emmanuel Macron and his Ensemble! coalition have suffered a disastrous result in the final round of voting in the parliamentary elections on Sunday, securing just 245 seats, far short of the 289 necessary to maintain a governing majority and at the low end of polling projections leading up to the vote.

The night’s true victor — at least in terms of exceeding expectations — was perhaps Marine Le Pen’s National Rally (RN), which saw a surprising result of 89 candidates elected to the National Assembly, the most in the history of the party, including its predecessor National Front. Le Pen’s party, which previously only boasted eight representatives, will now have enough representation to form a parliamentary group, providing a major boost to the party in terms of prominence in the national discussion and the ability to fundraise.

Prior to the second and final round of voting on Sunday, posters had estimated that RN would win between 25 and 45 seats, suggesting that anti-Macron sentiment was strong enough to convince left-wing voters to side with Le Pen to prevent the neoliberal president from retaining his grip over the parliament.

Hailing the stunning result for her party, the populist firebrand said: “This victory is that of the French people. Tonight, they have taken their destiny into their own hands by making Emmanuel Macron a minority president. This victory is yours!”….