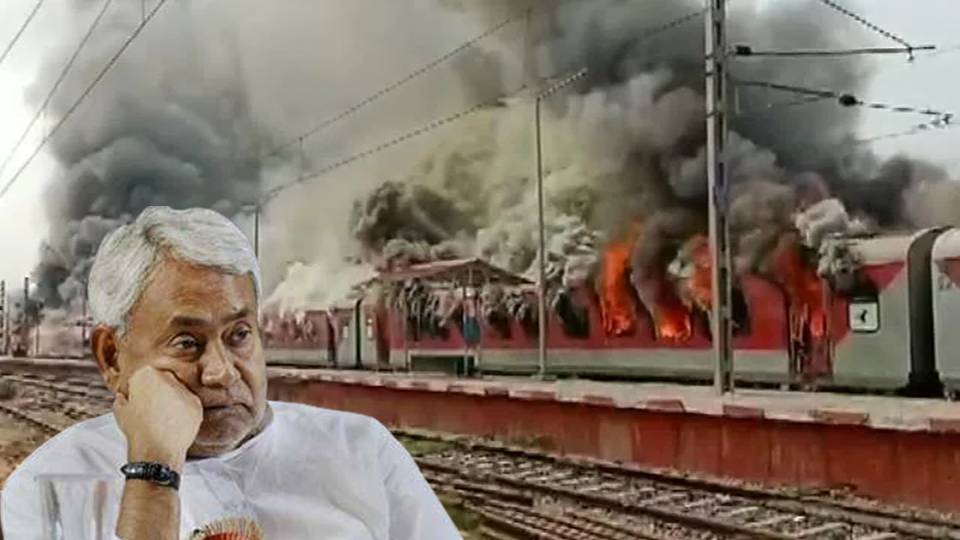 The headlines read, “Internet services are restored in 20 districts.” While reading the headline, one may think the news has its source in some disputed area, but the source was Indian state Bihar. Bihar saw the ruckus in the name of newly launched recruitment scheme. While the government of India has already made it clear that the Agnipath scheme won’t go the Farm laws way, there is a need to analyse the Bihar protests and silence of CM Nitish Kumar over it.

Bihar under Kumar is walking on ‘Agnipath’

In the aftermath of the launch of new military recruitment scheme; Agnipath, menace spread rapidly in different districts of Bihar. The state has witnessed largescale violence with trains being burnt, buses and private vehicles vandalised, houses and offices of politicians set on fire and incidents of stone-pelting.

Internet services were suspended in 17 out of 38 districts of Bihar as a response to the violence that broke out during the protests against Agnipath scheme. Police forces as well as Paramilitary forces were heavily deployed in the violence-hit regions in the state. Schools have been shut fearing the grim situation.

Amidst the unstable situation in the state, the political temperature has also soared up as the opposition has gathered fresh ammunitions criticising Nitish Kumar’s handling of the crisis. While the allies are questioning the silence of Nitish Kumar over the situation.

Bihar is governed by ‘Sushashan Babu’, this is something that the media might have made you believe. But the reality is far away and Bihar has faced the brunt of being governed by a not-so-competent leader.

Bihar was burning and surprisingly, the ruckus is not being created by some Naxal groups or anti-social elements, but by the students who claim to be aspirants for the Indian forces. And Nitish Kumar is a mum spectator, he silently gave a go-ahead to the miscreants, and there are underlying reasons behind this.

Nitish Kumar’s silence has angered ally BJP, whose high command has made General Bipin Rawat’s dream a reality by bringing in the Agnipath scheme. However, the central government’s initiative has snowballed into a big ego tussle between PM Narendra Modi and Nitish Kumar. The Bhartiya Janata Party is furious, not for the role of JDU leaders in fuelling protests, but majorly due to Kumar’s silence on the issue, even when half of the BJP offices were attacked and heckling of BJP leaders in the state.

However, this is not the first time that Nitish Kumar has opted a line other than the ally’s BJP. The same picture was drawn during the abrogation of Article 370, caste census, anti-conversion law, CAA-NRC.

Read More- Is it the end of Nitish era in Bihar?

Nitish Kumar’s unfettered ambition has pushed Bihar on the path of fire and he as a leader has miserably failed to industrialise the state and create jobs. The rise of Nitish Kumar during 2005- 2010 has pushed the state into an unprecedented crisis.

Nitish Kumar did attempt sanitisation to change the image of Bihar and Biharis in his initial years. He brought the law and order situation under control, and pulled Bihar out of the Jungle Raj. These steps could have helped Bihar, if it would have been consistent. The politics of Nitish Kumar engulfed the Sushashan Babu and the hopes of Biharis were shattered.

In the entire tenure of Lalu Yadav and Nitish Kumar, not a single industry of repute has put its foot in Bihar. Adding to the problem, agriculture has its own limits in Bihar, Bihar being a land-locked state. The consecutive governments have failed the people of Bihar. This is the reason why handfuls misguided and misled by vested political forces take law into their hands, the state machinery of CM Nitish Kumar practise the vanishing act as Nitish Kumar is guilty of many things including keeping the youth of the state unemployed.