Malik Lives: If Yasin Malik’s case is not “Rarest of the Rare”, then we don’t know what is 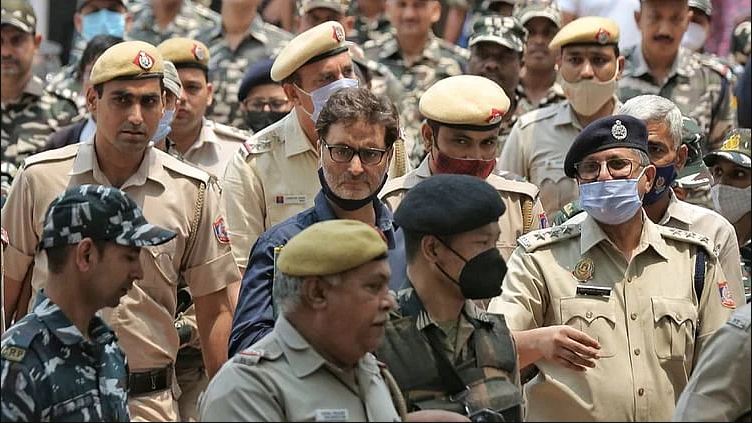 After Sedition, the Rarest of the rare doctrine of the Supreme Court has been the most controversial issue in Judicial history of independent India. Yasin Malik’s conviction and the fact that he was not awarded death sentence has forced us as a society to reconsider various aspects of the doctrine.

Yasin Malik to rot in Jail

Recently, a special NIA Court handed over 2 life sentences to Yasin Malik, leader of the infamous Jammu Kashmir Liberation Front (JKLF). Yasin was convicted of 9 charges. For most of these charges he was sent to jail for a time period ranging from 5 to 10 years. For waging war against India, he has been convicted for life under Section 121 of IPC. Same punishment has been meted out under Section 17 of UAPA act for raising funds for terrorist activities.

However, what intrigued most people is that the man was not awarded death penalty. It is not that NIA prosecutor did not ask for that kind of punishment. He had requested the Court for handing capital punishment for waging war against India, but the Court refused to hang Yasin till death.

Read more: Chances are that Yasin Malik will never step out of jail in his entire lifetime

Special Prosecutor Neel Kamal had urged that there is no possibility of Yasin Malik ever reforming in future. He added that punishment awarded to Yasin should act as a deterrent for anyone ever willing to wage war against India in future. However, the opposition Counsel argued that because Yasin had himself pleaded guilty to the charges on him, the deterrent argument should be done away with as it would set a bad precedent for future.

The Honourable Court decided to take a humanitarian approach on the judgement. “The net result of the judicial pronouncements is that death penalty should be awarded in exceptional cases where the crime by its nature shocks the collective consciousness of the society and has been committed with unmatched cruelty and in a gruesome manner,” said the Court.

The Court further accepted that the act in question led to shutdown of government machinery and risked the secession of J&K from India. Still the Court refused to handle death penalty because it believed that the manner in which it was committed would not pass the rarest of the rare test.

“In the present case, the manner in which the crime was committed was in the form of conspiracy whereby there was an attempted insurrection by instigating, stone pelting and arson and a very large scale violence led to shut of the government machinery and ultimate secession of J&K from UOI. However, the manner of the commission of crime, the kind of weaponry used in the crime lead me to a conclusion that the crime in question would fail the test of rarest of rare case as laid down by the Supreme Court,” said the Court

Read more: The negative impact of Supreme Court’s ‘humanitarian’ gesture towards the rapist of a 4-year-old girl

Genocide of Kashmir Pandit is not relevant-Court

Public Prosecutor had also submitted that Malik was responsible for the genocide of Kashmiri Pandits and their exodus. However, the Court did not find it relevant to the case and refused to hang Yasin. “Senior PP for NIA has tried to impress upon the court that while awarding sentence court should consider that the convict was responsible for the genocide of Kashmiri Pundits and their exodus. However, I find that as this issue is neither before this court, nor has been adjudicated upon and thus court cannot allow itself to be swayed by this argument,” said the Court

The fact that the Court did not consider substantive evidence of waging war against the country as ‘shocking collective consciousness of society’ again raised questions over the rarest of the rare doctrine. The question is if waging a war against a civilization state is not something which shocks the public conscience then what will. The very fact of the matter is that a fixed geography provides a sense of security to people existing on it. Through this sense of security, they live, they form a family, they toil in backbreaking industries to earn bread and butter. It is what makes them civilised. If someone is trying to snatch that very sense of security from them, then it should be considered a crime against more than 1 billion.

Kashmir is integral to India. If somebody is trying to secede it from India and eventually handle it over to a terrorist nation, then the person (Malik here) is not only committing a crime against rest of India, but also against Kashmiris, whom he does not considered to be part of India. If the Honourable Court had delved on to the fact that Malik’s action impacted India in long run, I am sure that Court would have found that what Malik did (proved in Court) was good enough to shock the collective conscience.

But, that is what the rarest of rare doctrine has done to Indian Judicial set up. The apex Court came up with this principle in Bacchan Singh v. State of Punjab. However, the Court did not define the term in clear and unequivocal terms and left it for the Judicial Officers to decide on the facts and circumstances of individual cases. A legal blog has summarised the rarest of the rare doctrine in following words, “Capital punishment is sacred in the event that it is endorsed as an option for the offence of homicide and if the ordinary sentence recommended by law for homicide is detainment forever. This implies capital punishment must be forced on rarest of rare cases where an elective choice is avoided”

Later, the doctrine evolved into a vaguer one. There have been cases in which in spite of having similar facts and circumstances, different Bench of the apex Court considered one of them as rarest of the rare while the other one was not declared as such. To remove these discrepancies, the Court came up with a guideline in  Machhi Singh v. State of Punjab. Courts have to look at both nature and the gravity of the crime.

What Afazal did and what Yasin Malik did were not much different in terms of effect. Though, Afzal’s actions had an immediate impact on the polity of India, while Malik made India bleed slowly but more ferociously. Both should be looked at from a similar lens.