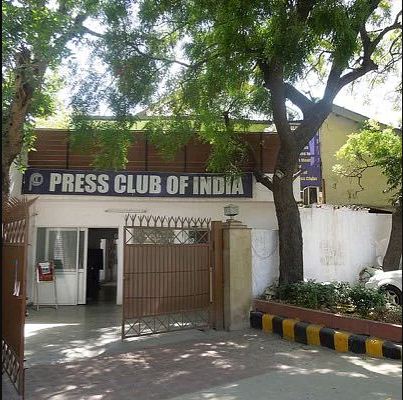 Few things in the world only exist to serve as a good example of how bad and useless something could be. Wait, what? I am not talking about Alt Balaji. Even the OTT platform has some interesting shows like Bose:Dead/Alive. However, there exists a club that isactually poor than what Alt Balaji had performed ever since it was launched.

It is none other than the Press Club of India – an elite club of journalists usually having one ideological line of thinking.

Press Club of India is a sham

While the name suggests that it is some kind of revolutionary group that is working around the clock to reform the Indian Press. The reality, however, is far from it. One of the most rubbish organisations that merely understand what narratives are and how they are run.

Let’s just talk about the funniest part. My face muscles hurt when I read that “Press club in India is mainly to ensure that the media has total freedom of speech. Press club foundation are for the journalists who come together for the production and diffusion of news.”

Sorry, but who cares? Who asks for your opinion? I understand that the journalists are never off duty and such groups can help them relieve their stress but don’t you dare say that the group actually works to set a narrative.

Of course, there was a time when PCI played a major role whenever a CM was elected or any other political activity transpired. But it was a long time back when nothing like a 24×7 news channel existed. Ever since the evolution of broadcast media, the news channels took the onus upon themselves to set a narrative. What did PCI used to do then? Well, nothing.

People don’t really need a club and it provides negligible help to anyone to gather information on any issue. What they need is a mobile with data. One google search and they are the masters. They can easily scroll Twitter or Facebook and can teach PCI though.

The press club of India claims that it works on improving the standards of the press. However, it works even more to offer a luxurious lifestyle. It provides its members with the amenities such as a library, a reading room, gym, swimming pool, snacks, conference hall, etc.

Twitter user Alok Bhatt once exposed the Press Club of India which he alleged is a club of leftists, yet enjoys all facilities from the centre like a Lutyen’s office and subsidized food and liquor.

Press Club of India has 4,200 journalist members, 900 associate members, few dozen corporate members & a Lutyen zone property at 1, Raisina Road (obviously given at taxpayer’s exp), where they are eligible to subsidised food and subsidised liquor!

Few days back, it was reported that journalist members of the Press Club of India in Delhi are angry. No, they are not angry because of some political or ideological issues. They were fumed over alleged higher prices of alcoholic drinks served in the club. One of the club’s members took to social media to complain about the increased rates of liquor in the club, calling it a loot.

Interestingly, the Press Club has its own restaurant-cum-bar in its premises in Lutyens Delhi. You can easily find Vodka, Brandy, Whisky, Rum and Beer of various labels here.

Now, it won’t be hard for you to imagine how ‘Vella’ these folks are! At a time when the nation is dealing with religion bases, politics based and much other chaos, PCI, which was rather formed to fight for the rights of the Press is crying hoarse for liquor. Quite revolutionary!

Read more: A Lutyen’s office, Subsidized food and liquor and sham elections – The Truth of the elitist Press Club of India

Moreover, PCI was also caught up in controversies when filmmaker Vivek Ranjan Agnihotri revealed that the Press Club of India cancelled his Press Conference. In his tweet, Agnihotri said, “Wow! Press Club of India also cancelled me. The watchdogs of democracy and messiah of free speech not only banned me undemocratically but are also lying through their teeth.”

He was quoting a May 3 tweet of PCI where they had claimed that Press Conferences at their premises are allowed only with advance booking that too done through a member of the Club.

Wow! @PCITweets also cancelled me. The watchdogs of democracy and messiah of free speech not only banned me undemocratically but are also lying through their teeth.
1. Encl are the facts.
2. They have booked earlier through our agency without any member’s recco. Receipt encl. https://t.co/APRzRlYR18 pic.twitter.com/BQTcY1SXUs

Earlier as reported by TFI, the elections were held last year in an atmosphere of tension, uncertainty, many from within the club were of the opinion that the elections were rigged and large scale fraud was effectuated prior to and during the polling. Two panels were contesting for various posts of the club, which has an annual turnover of over 9 crore rupees and is a den of journalists and What does PCI really do? Well, it only enjoys the privilege of doing nothing. It merely does anything for Indian Press and its existence is useless. However, it shouldn’t be scrapped as I said in the beginning that few things should exist only to set an example of how bad and inefficient something could be.