Dear BJP, if you are serious about winning Rajasthan, get back Hanuman Beniwal 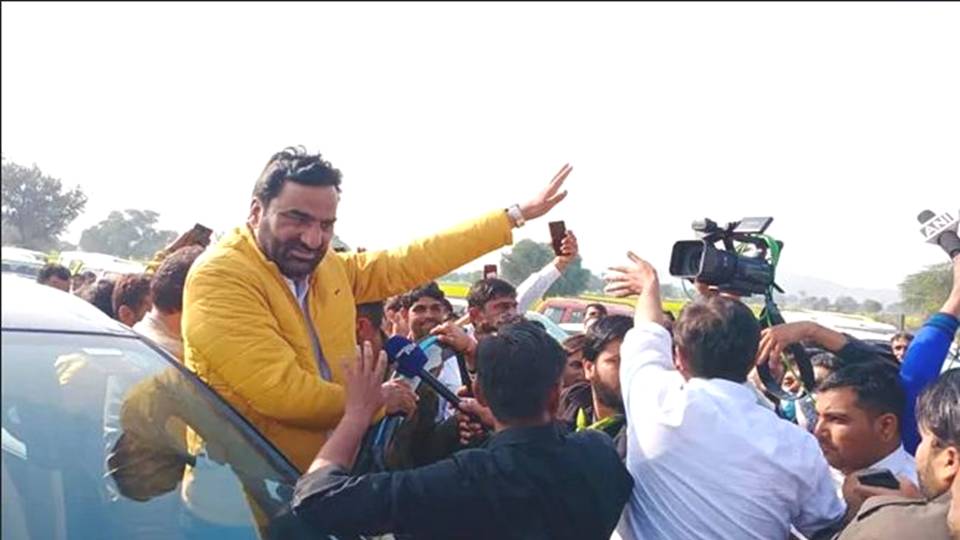 Rajasthan is all set to witness a magnanimous festival of democracy. As assembly elections are due in the western state, the political parties have started focusing on strengthening their hold in the state. Rajasthan has a history of anti-incumbency and none of the political stalwarts have ever been able to beat anti-incumbency.

Well, how the things unfold will be a delight to watch, as Bhartiya Janata Party is in an urgent need of a ‘face’ and popular Jat-leader Hanuman Beniwal is the best suited man for this. Change is the rule of nature and BJP needs to change its game and incorporate Beniwal to maintain the history of anti-incumbency in the state.

Challenges for BJP ahead of Rajasthan polls

Ashok Gehlot, the man ruling Rajasthan is a man with humongous appetite who has eaten almost every Congress leader since 1998. Needless to say, Gehlot has thrown the state under the bus, and is one ofthe most useless CMs Rajasthan has got. However, he is a politician and a cunning one at that. And this makes the battle a bit tougher for the BJP.

The opposition in the state, the Bhartiya Janata Party is facing several crises, the major one being internal rifts. The ‘leader’ of BJP in the state Vasundhra Raje can be counted as a major reason behind the thrashing BJP got in the last elections. The people of Rajasthan loved PM Modi but loathed then CM Raje, and the popular slogan of the election “Modi tujhse bair nahi, par Rani teri khair nahi” stands in deposition of the same.

Vasundhra Raje is the ‘face’ of BJP in the state, and there is no prominent second in line of leadership in the state. It is apt to say that there exists no Sachin Pilot within the BJP. Vasundhra Raje has systematically made sure that BJP remains deprived of big leaders and only one name propagates that is of ‘Rajmata’.

If BJP wants to contest in the state, it needs to resolve the Vasundhra Raje issue as soon as possible, and the best man for the job is Jat leader Hanuman Beniwal.

The farmer leader Hanuman Beniwal knows the skill of winning hearts, and this is the reason behind his mass appeal in the state of Rajasthan. Beniwal hails from a political family as his father served as an MLA and this explains his tilt towards politics.

Beniwal completed his studies and there he contested his first-ever election. In 1995 he was elected as the President of the college. In 1996, he got elected as the students’ union president of Law College and in 1997 of Rajasthan University. During the presidentship he became a prominent name in protests in the state, and Beniwal rose to prominence. Since then Beniwal had been moving upwards and onwards while never looking back. In 2003, he reached assembly by contesting on a INLD ticket from Nagaur constituency. In 2008, he moved to BJP and registered a massive victory once again.

The fault lines began to appear very soon, and Beniwal was expelled from the party after he alleged that there was rampant corruption within BJP politicians and their connections with the Congress party. He did not lose hopes and went on to repeat his history in 2013 as an independent candidate.

In 2018, Beniwal floated his own party named Rashtriya Loktantrik Party. The party fielded candidates on 58 seats, from which 3 candidates registered victory and marked the presence of Beniwal’s party in the legislative assembly.

Read More: Why Hanuman Beniwal’s party will benefit the BJP in Rajasthan elections?

This time, Beniwal’s outfit heavily dented BJP’s votebank in the Jat belt and Beniwal rose to prominence as the Jat leader of Rajasthan who has a hold on the Jat community in the state.

Hanuman Beniwal may prove to be BJP’s sankat mochan

Beniwal later joined hands with the Bhartiya Janata Party just before the 2019 general elections, and this negotiation benefitted the saffron party and the BJP swept through the state uncontested. The BJP monopolised 24 out of 25 seats it contested in. Hanuman Beniwal won Nagaur parliamentary constituency with a heavy margin and defeated Congress’ Jyoti Mirdha.

Read More: Dear Vasundhara, why stay in BJP when you are silent on Gehlot? You can always switch sides

The alliance benefitted the BJP in the Shekhawati belt, especially in the districts of Balmer, Jalor, Pali, Ajmer. If the Bhartiya Janata Party is serious about repeating 2019, then it must put in all the effort to bring Beniwal under its fold.

Not to mention, Beniwal was a vocal critic of BJP ‘giant’ Vasundhra Raje, and there is no need to mention that one cannot survive within Rajasthan BJP while antagonising Raje. And Beniwal had paid the price for the same. Now, the time has come that BJP creeps out from the clutches of Raje in the state and establishes a second line of leadership, making Hanuman Beniwal its face.

The BJP has attempted to merge RLD within itself, however, Beniwal did not agree to it. As a leader of his people who suffered humiliation and was forced to contest independent, he never will.

Hanuman Beniwal is a man who has an appeal that has the potential to make people rally behind him and BJP should negotiate with the neta it lost in 2013 due to Raje’s arrogance and bring him back to the saffron party. This is the only way BJP can counter Raje’s arrogance and appeal to the people of Rajasthan in the upcoming assembly election.