4 years of Biplab Deb: A little controversy, a lot of work 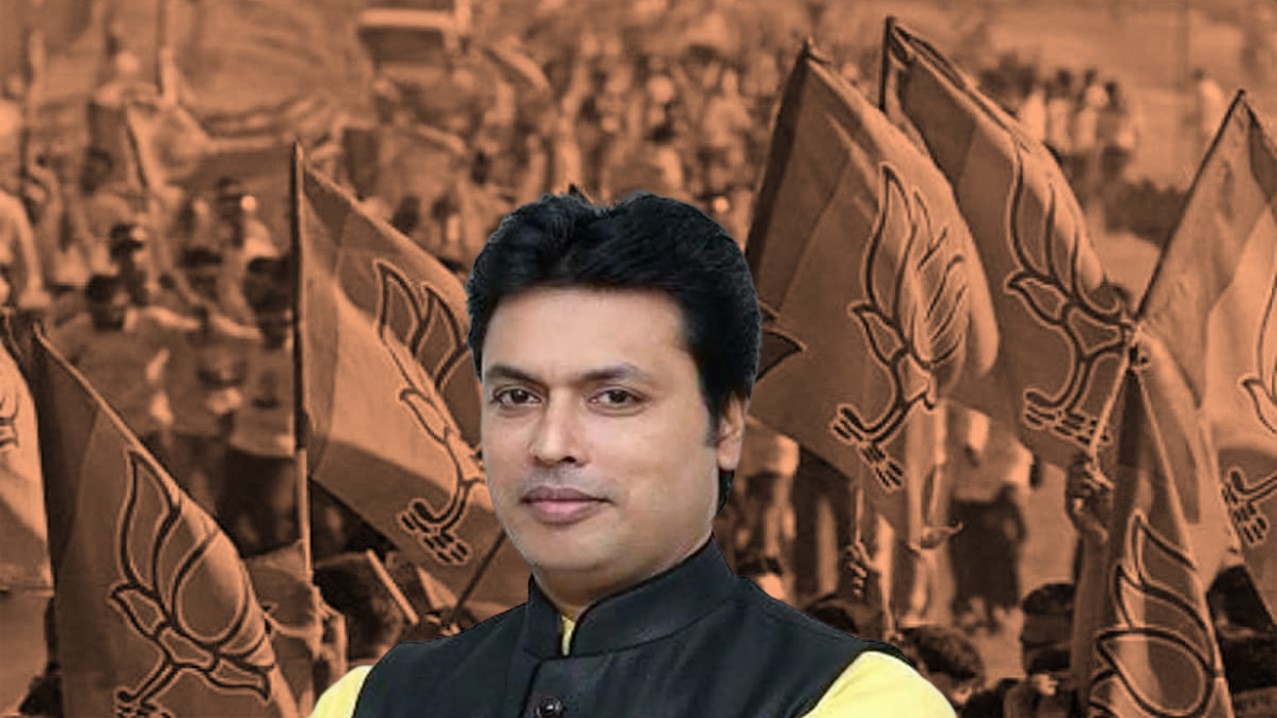 Biplab Kumar Deb, on Saturday, resigned from the post of Chief Minister of Tripura. Though many speculations are going on related to his resignation, the main point of attraction today should be the tenure of Biplab Deb. He is a man who ate the Left in just one giant gulp. And he is a man who has many accolades to his name, especially regarding the development of the North-Eastern state.

Biplab Deb: The man who ate the left in one giant gulp

Communists ruled Tripura, and the north-eastern state was often referred to as the undefeated bastion of the Left. For the last twenty years, the Left was ruling the state and maintained it as their impregnable fortress.

However, history was rewritten in 2018, when a former gym trainer from New Delhi became the face who ended the mighty left rule and conquered the North-Eastern state for the Bhartiya Janta Party.

52-year-old Biplab Kumar Deb was hoisted as the chief minister of the state by the saffron party despite innumerable revolts from within the party.

Under Deb, Tripura had a glimpse of infrastructural development

Tripura, along with the other six sisters, was given a step-motherly treatment by the Congress party since independence. The north-eastern region of India was lagging behind in the prospects of growth and development. The state was devoid of basic infrastructures like roads and railway lines.

The Biplab Deb-led BJP government in Tripura on the contrary primarily focused on development, connectivity, infrastructure and investment. One of the major pushes of the Deb government was increasing the upper limit to avail state subsidy on MSME investments to Rs 1 crore from Rs 60 lakh.

The Deb government had attempted to give a major boost to the industrial sector and made changes in the Tripura Industrial Investment Promotion scheme.

Be it railway or road connectivity or the infrastructure, Biplab Deb left no stone unturned in connecting Tripura to mainland India.

Biplab Deb worked non-stop to fulfil one of the prominent poll promises made by the BJP led alliance. He launched a massive crackdown on all crime syndicates operating under the patronage of the CPI(M) led left front.

One of the major syndicates was the drug cartel. The drug issue in Tripura has three broad dimensions, including widespread cultivation of ganja (cannabis), use of Tripura as a medium for transportation of heroin and other drugs received from Myanmar to other parts of India and finally, smuggling of prescription drugs from Tripura to Bangladesh.

The BJP government led by CM Biplab Deb cracked down hard on the drug mafias and cartels operating in Tripura. As the CM of the state, Deb had also pointed out the blatant cannabis cultivation in the state. Deb took it as a personal mission to make Tripura a drugs free state.

The Law-and-Order situation under Biplab Deb

There is no denying the fact that the communist regime of Tripura was deliberately backwards. The Left’s prime focus throughout its extensive years was ‘politics of violence’. Tripura was on the same page as West Bengal when it comes to political violence. However, Biplab Deb took the onus on himself to release Tripura from the clutches of political goons.

Within a year in office, Deb had shed light on the law-and-order situation of the state. He compared the status with that of 2017 and remarked that the situation is far better than what it was a year ahead. He mentioned that crime against women has reduced by six per cent, dowry-related deaths reduced to 45 per cent, incidents of rape reduced to five per cent while molestation cases saw a drop of 18 per cent. He also mentioned that the conviction rate is 25 per cent higher than those under previous governments.

To achieve these numbers, CM Biplab Deb not only gave his police a free hand but also assured that the party leaders do not interfere in any kind of cases related to law and order.

Biplab Deb revolutionised the Education of Tripura State’s Board of Secondary Education. He made changes to the ‘books’ of the Communist regime and kicked out the Russian and French Revolution along with Hitler and brought in Subash Chandra Bose and Rani Laxmi Bai. Deb did the course correction; he removed the Marxist adulterated textbooks and prescribed books which included Tripura’s history.

Biplab Deb during his tenure also resolved to provide high-quality governance to Tripura. He worked tirelessly in the direction of illegal immigration to ensure security for the citizens of Tripura against rampant immigration by launching a monumental assault against illegal immigrants in the state.

One of the prime agendas on the list of ex-CM Biplab Deb was to establish a system free from corruption. While getting the chair, he had asserted that his priority was to establish a “corruption-free, dynamic and transparent” government in the state, which was under the uninterrupted Left rule for more than two decades. And he had proceeded in this direction during his 4-year tenure.

Though he did massive work in the state of Tripura, he is also the king of controversies. Deb has courted controversies many times during his tenure as the chief minister of Tripura. He had once claimed that the internet and satellite existed during the time of Mahabharata. He also called the beauty pageants a farce and questioned the crowning of Diana Hayden as ‘Miss World’ in 1997. Though every time he had solid proof to back his claims.

Biplab Deb must be credited for saving the north-eastern state of Tripura from the clutches of political violence, extremism, infiltration, drugs and arms trafficking.