‘Only North Indians are being rescued from Ukraine’, DMK goes bonkers 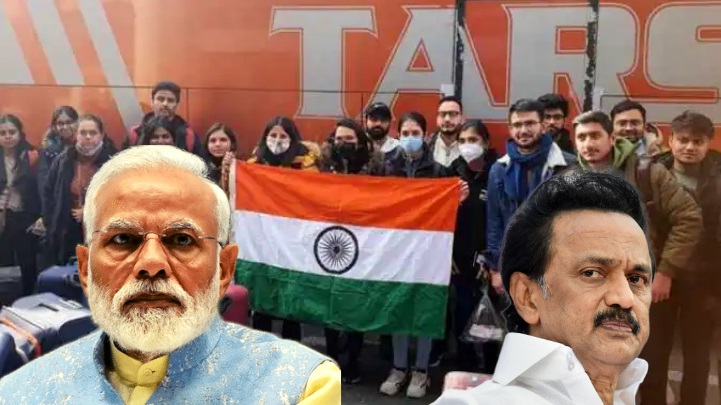 Since the day Russia started its invasion of Ukraine, the Indian government is hell-bent on bringing back every stranded Indian national. But some see it as an opportunity to play politics. DMK is fanning the north-south divide in an evacuation operation by alleging that only north Indians are being rescued from war-torn Ukraine.

Operation Ganga: An attempt to bring back Indian nationals

India has a distinguished legacy of not abandoning its citizens unaided in conflict zones. The Indian government is giving meaning to former foreign minister late Sushma Swaraj’s words when she said, “Even if you are stuck on the Mars, Indian Embassy there will help you.”

Read More- As per ‘The Hindu’, it was TN government that evacuated students from Ukraine and not the GoI

Within days Russia started the invasion of Ukraine, the Indian government launched an evacuation operation under the name ‘Operation Ganga’.  The Indian government did not just mount Operation Ganga in and around Ukraine to bring back stranded Indian nationals, but also has deployed four union ministers in neighbouring countries of Ukraine to coordinate the evacuation process.

M.K.Stalin’s  DMK i.e currently ruling the state of Tamil Nadu had found an opportunity in the time of crisis to play politics. DMK is alleging the failure of Operation Ganga and blaming the central government for the same. DMK Spokesperson A Saravanan alleged that partiality is being practised in the evacuation process by giving preference to the Hindi speaking North Indian students. And the South Indian students are being ignored due to the language barrier as the Embassy officials are only speaking in Hindi.

While speaking at a Times Now debate, DMK spokesperson made these claims. However, he could not provide any evidence to back the same.  And he cited the same reason to defend the Stalin government’s move of launching its own evacuation plan and sending four legislators to Hungary, Romania, Poland and Slovakia.

These claims may be alarming but are to date unverified. Though a few days before, some allegedly stranded students from Tamil Nadu made similar claims saying that Hindi speaking students were given more priority and they have been made to wait for their turn despite empty seats.

Not only this, earlier CM MK Stalin has himself demanded that students from Tamil Nadu should be given priority over students from other states in evacuation. And now, the DMK is again fanning the North-South divide.

Also, since the DMK government raised allegations of discrimination, this propaganda is doing rounds on the internet, especially social media.

Despite the Central government having put in all the efforts, political parties like DMK are playing the blame game and petty politics over the mission and that is unfortunate.