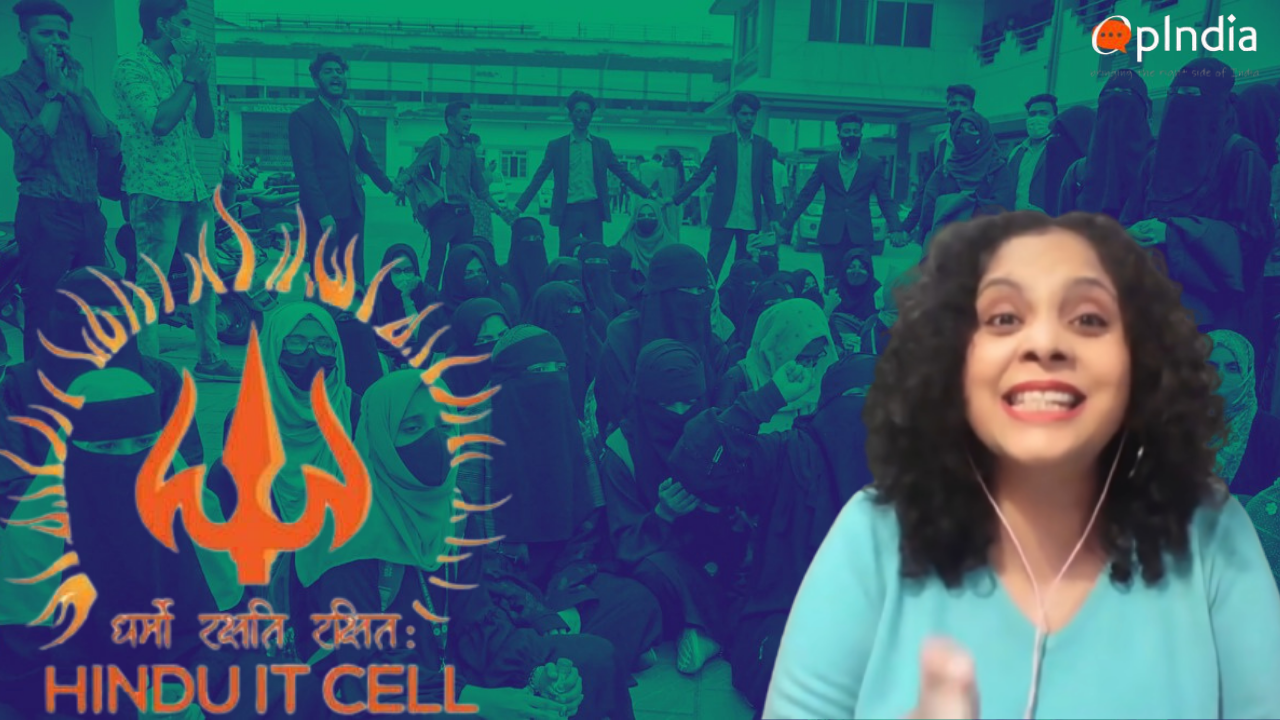 The Hubballi-Dharwad police have registered an FIR against alleged journalist Rana Ayyub for calling students at Udupi college protesting with Saffron flags as terrorists. It is pertinent to note that recently, the Enforcement Directorate had frozen the accounts of Rana Ayyub and attached Rs 1.77 crores that she had raised in the name of charity and siphoned off in the accounts of her family members and herself.

On February 21, the Hindu activist group – Hindu IT Cell had filed a complaint against Rana Ayyub for referring to students at Udupi college protesting against the Muslim girl students as ‘terrorists’

In an interview with the BBC, Rana Ayyub was clearly seen referring to Hindu students protesting against the burqa as vigilantes and terrorists. In an aggressive tone typical to her, she was seen ranting, “…Why suddenly has this group of young Hindu vigilantes – Hindu terrorists for that matter who are hosting saffron flags in an educational complex in Karnataka?”

She was seen questioning, “Why are male students unfurling a saffron flag in an educational institution? What does that mean?”

According to @RanaAyyub Saffron Clad male students are ‘Hindu Terrorists’. This clearly is her Hate for Hindus. #ArrestRanaAyyub pic.twitter.com/z2LmoY8CpX

After the inciting video made rounds on social media, the Hindu IT Cell had registered a complaint. The complainant had urged the police to register a case against the anti-Indian propagandist under the IPC Sections of 124A (Sedition), 153A (creating enmity and division), 295A and 298 (deliberate and malicious attempt to outrage religious feelings), 504 (intentional insult to Hindu community) and other section.

However, a few days later, after registering the complaint, the Hindu IT Cell had alleged that the police were refusing to register the complaint.

In a tweet, the Hindu IT Cell had shared their grievance against the police officials, alleging that they had made one of the volunteers of the organisation wait for 36 hours before accepting the complaint against Rana Ayyub. The activist group had alleged that the Dharwad police had refused even to register the FIR.

ATTN @DgpKarnataka @BJP4Karnataka @JnanendraAraga our volunteer @3dashwath made to wait 36 hours just to get recieving for a serious criminal complaint against Rana Ayyub. Police refusing to even take FIR. Is this the power of your voters and common man? pic.twitter.com/X3Ek8W7AIF

Following the outrage, Police Sub-inspector Sachin said the higher officials had asked them to verify the complaint, and the legal department is looking into it.

Earlier, a similar complaint had been registered by Ashutosh J Dubey, a practising lawyer at Bombay High Court, against Rana Ayyub at Greater Mumbai Police at Bandra.

The Washington Post columnist was in the news after the ED recently attached her assets after being accused of financial fraud worth Rs 1.77 crore in the name of Covid-19 donations. However, Rana brazened out after being exposed by resorting to her usual Hindupohobic rants.