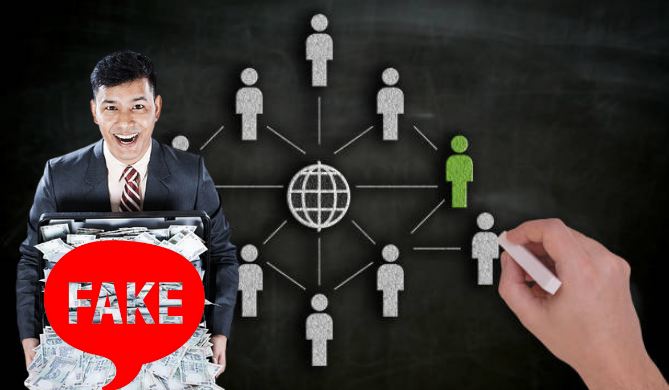 If you are Indian, you must have muted someone’s WhatsApp story for spamming you with advertisements. We believe that you should be sympathetic to them. They are stuck in the never-ending spiral of multilevel marketing scams, also popularly known as MLM or Pyramid scheme marketing

We are here to explain the nitty and gritty of these multilevel marketing business model. You can learn a trick or two to recognize those fooling your friend. Additionally, you would never fall into their traps.

Multilevel marketers are frauds, but in no way they are stupid. They know exactly what you will fall for and plan according to that. Here are ways how they cheat you:

They will approach you with suave. You will find them well-dressed with expensive-looking clothes. Their shoes will be polished, and the tie will be in place. This creates an image of perfection in your mind. Subconsciously, you are drawn towards their personalities and want to know more about and from them.

In all their appeals, they barely mention money. Instead, they mention daily lifestyle changes which will come with money. They use fake quotes on the name of billionaires like Bill Gates and Warren Buffet to peddle their agendas.

These multilevel marketing experts won’t be meeting you at your nearby Chai ki Tapri. You will be called in to attend their seminars in lavish hotels. There you will find loads of people curious about these schemes. All the people along with you, have been brought in by those wearing the same type of uniform; which is generally a Black coat, black pants and tie in those seminars. The one who brought you is also wearing the same.

In seminars, there is a proper ceremony to honour fake winners. These fake winners are those which these marketers claim to have benefitted from their schemes. A fake motivational speaker is there to give them a medal.

After the medal ceremony, that speaker will deliver the long prepared lectures. These lectures are mainly derivation of various pieces of knowledge involved in books. They use quotes and incidents from Gita, Ved, Ramayan etc to substantiate their point.

These are used to just invoke your emotions. If you listen to them carefully, you will find that these quotes are forcing you to pour money into their schemes; which is their purpose.

Since we have described their frauds, a natural question emerges is that why is there no action on them? The answer lies in their business models.

Normally, when a company wants to sell their products, they hire an advertising agency to speak for them. This costs them a lot. Add to that, the cost of hiring a celebrity, shooting an advertisement and booking a time slot on TV to run ads. MLMs have found a smarter way to bypass it.

They tell you that you have to join a company with a certain minimum investment. Then, they will give you their products claiming that those are your joining bonuses. After that, MLMs ask you to persuade at least two more people to join. They promise you a commission if your contacts join.

When they join, they elaborate similar schemes to them. In this way, they sell their products to you, your contacts and down the ladder. This is the simple model on which multi-level marketing runs all around the world. They are not making you join any entity; they are selling you their product. You are the consumer.

Fine, but I am still earning commission, what’s the problem with that?

Simple math will shatter your dreams. Suppose you persuade two people to join in. Then those two people will persuade four others to join. Those four will persuade eight to join in. For a brief period, you will keep getting passive income, which is MLM’s trademark promise. It’s exactly what you thought, right?

Simply put, after 33 cycles, there will be no single person left in the world to join your scheme. You don’t need us to tell you about returns on investment.

MLM’s though seem to be quite lucrative but is a vicious circle. MLM companies sell fake dreams and those who become the target, never really come out of it. These people do not only end up getting stuck in a never-ending cycle of financial trouble, as they never get their return on their investment, they also start getting ignored by everyone close to them.

It is thus advised that there is no shortcut to becoming a millionaire. Anyone who claims to make you successful without really working hard is just trapping you in another scam.