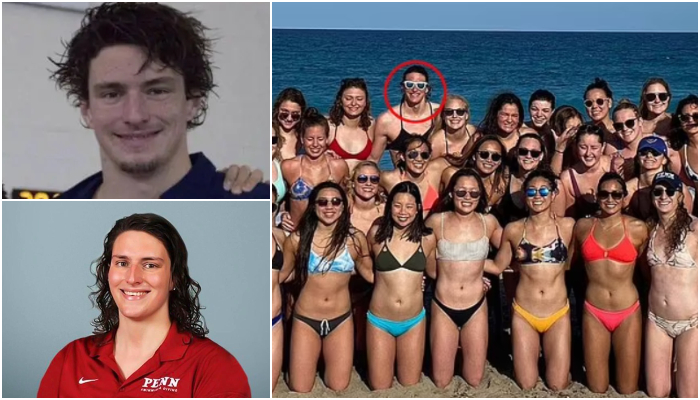 On Friday, the female swimmers of the University of Pennsylvania slammed the school for allowing transgender swimmer Lia Thomas to swim against women swimmers. The teammates have also complained that they feel uncomfortable sharing the locker room space with Lia.

According to reports, the female swimmers are forced to share the changing room and locker room with 22-year-old Lia Thomas is biologically a male. The ladies have alleged that the school condones this.

One of the 35 swimmers in an exclusive interview to the Daily Mail has said that Thomas has male body parts and is still attracted to women. “While Lia covers herself with a towel sometimes, there’s a decent amount of nudity”, she was quoted adding that she and other teammates have had an accidental glimpse at Thomas’ private parts.

The University of Pennsylvania has thought about Lia Thomas but hasn’t thought about how girls might feel to share the locker room with a trans, she added further alleging that the coach and the school have forced them to accept Thomas.

The swimmer girl who was interviewed has strictly asked to keep her identity secret as no one but only she is ready to speak about the problem and that she fears that the society might think of her as a ‘trans-phobic’.

Colleen Young, an American swimmer who is a three times Paralympic medalist has also raised her voice to protect women’s sports. “Lia Thomas is a biological male swimming against biological females. Whether she identifies as a girl is irrelevant to the fact that she was born a male, went through puberty as a male, and swam on the men team for 3 years. Protect women’s sports”, she tweeted.

Lia Thomas is a biological male swimming against biological females. Whether she identifies as a girl is irrelevant to the fact that she was born a male, went through puberty as a male, and swam on the mens team for 3 years. Protect women’s sports.

Meanwhile, Brooke Forde, an NCAA swimmer who is likely to compete against Lia Thomas for a national title has said that she has no problem in competeing to a former male and that respecting person was more important than winning a trophy.

Sports Illustrated reporter Pat Forde asked his daughter, Brooke Forde, an NCAA swimmer, for her thoughts on fellow swimmer Lia Thomas, against whom she’ll likely be competing for a national title. To his surprise, she already had a statement ready.https://t.co/N30JruKfm3 pic.twitter.com/ubxACKWRr8

In a statement, Brooke said, “Social change is a difficult process and it requires enormous amount of courage. I will not have problem racing against Lia at NCAA’s this year”. She also added that Lia Thomas’ leadership is admired and would help many trans athletes around the globe.

It is to be noted that Lia Thomas has spent the previous three years swimming with the University of Pennsylvania men’s team as ‘Will Thomas’ before she began transitioning to a woman in 2019.