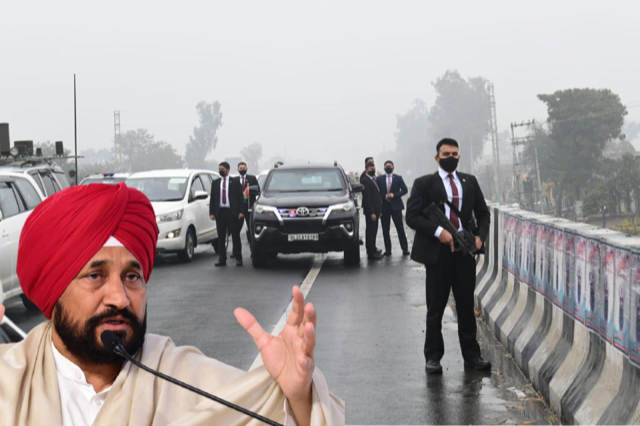 Hours before the apex court of the country heard a petition seeking a court-monitored probe into the security breach of PM Modi’s convoy in Punjab, the Channi government on Thursday filed an FIR in the case, a report by The New Indian said.

However, the FIR made no mention of a security lapse in PM Modi’s cavalcade on January 5 when his convoy was stuck for over 20 minutes at a flyover about 30 km away from Hussainiwala after protesters blocked the road.

The incident had led to a face-off between the ruling BJP and Congress party which is currently in power in Punjab. The Congress government in Punjab was under the firing line of the BJP leaders, who accused the Channi regime of deliberately endangering the life of PM Modi by providing inadequate security measures and leaking details of his travel route to the public.

In the FIR accessed by the New Indian, the Punjab government has invoked only IPC section 283 which deals with the offences related to “taking a property in the possession or under the charge that causes danger, obstruction or injury to any person in any public way or public line of navigation.”

Besides being a bailable offence, the maximum penalty a culprit can get under this section is just Rs 200.

The FIR makes no mention of PM Modi’s cavalcade being forced to stop because of the presence of political party workers, activists, protesters or unions. Furthermore, the FIR is also solely based on the statement of Punjab Police’s own DSP Mahendar Bansal, who is linked with Crime Against Women(CAW).

“On reaching the Krishi Bhawan route on Ferozepur-Moga, I was told that some unidentified men had blocked the route which was seeing the movement of VIPS and those who wanted to attend the rally. This happened from 2:30 pm-3 pm. When I reached the police station, there was a protest there…” the FIR contents read.

Interestingly, the FIR does not mention the name of any particular farm union or outfit responsible for the blockade witnessed on January 5 and whose details were shared by Punjab’s security and intelligence teams for the last one week while they were having dialogues with Special Protection Group(SPG) on PM Modi’s visit to Ferozepur.

Interestingly, the FIR was filed following outrage from several quarters, with some blaming the Punjab government’s negligence over PM Modi’s security while others accusing them of hatching a conspiracy to bring bodily harm to the Prime Minister. Amidst the ensuing imbroglio, Punjab chief minister Charanjit Singh Channi tied himself in knots by making a series of contradictory statements following the incident.

As reports of a breach in PM Modi’s security started to trickle in, CM Channi tried to abdicate himself from his responsibility of ensuring that the Prime Minister of the country remains safe in a state under his governance. Speaking to the media, CM Channi admitted to a security breach by claiming that it was ‘Kudrati’ or occurred naturally.

However, within a few hours time, Channi backtracked from his comments, asserting that there was no security lapse in PM Modi’s cavalcade. From ‘Kudarati’, in a matter of a few hours, Channi said the security breach did not exist. As his government started facing criticism for not providing adequate security to the Prime Minister of the country, Channi went on to pass the buck on Prime Minister for the quagmire.

In a statement, the Home Ministry said that the PM was scheduled to visit the National Martyr’s Memorial in Punjab’s Hussainiwala by helicopter. However due to adverse weather conditions, the helicopter ride was cancelled and the PM chose to go by road, which would take more than 2 hours.

As per protocol, necessary confirmations were done with Punjab DGP and the PM’s convoy started after confirmation for security arrangements was provided by Punjab Police. However, at a flyover about 30 km away from Hussainiwala, the road was found to be blocked by some protestors.

The Prime Minister’s vehicle was struck in the flyover for 15-20 minutes, as per the statement. Calling this a major lapse in the security of the PM, the Home Ministry stated that the PM’s travel plan was communicated well in advance to the state government. The state government is required to make necessary arrangements for security, logistics and also make a contingency plan ready in case of unexpected issues.