On Shrikant Tyagi’s birthday, hundreds of workers descended on the Camp office in Modinagar 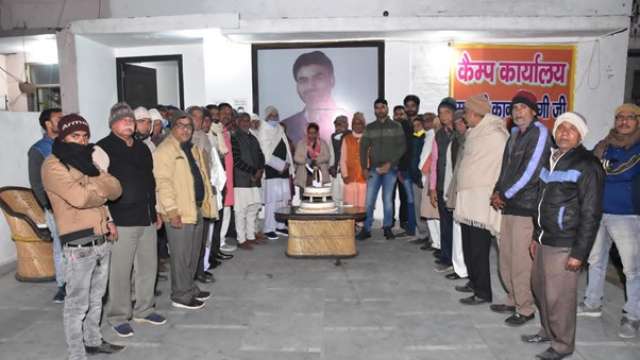 Shrikant Tyagi, a popular leader in western Uttar Pradesh and a member of the BJP Kisan Morcha whose distinct identity is known as Hindu Hriday Samrat, celebrated his birthday with great pomp in his assembly district of Modinagar today, January 19. He is quarantined at home due to the symptoms of covid-19 that he has been experiencing for two days. On Mr. Tyagi’s birth anniversary, assembly seat 57 in Modinagar district, Ghaziabad, Shrikant Tyagi Youth Brigade, and Bhriguvanshi Army have provided basic strength to the poor, workers, laborers, deprived society as well as the youth and elders for the last ten years. In addition to blankets and sewing machines distributed to widows, youth have received tracksuits and T-shirts. This time, however, no program was held since Shrikant Tyagi was infected with Covid-19 and was unable to attend in accordance with the model election code of conduct. The birthday of Mr. Tyagi is celebrated with great pomp and ceremony every year by hundreds of Mr. Tyagi’s workers, and this year was no exception, as his birthday was also celebrated according to Mr. Srikant Tyagi’s ideals.  On Mr.Tyagis’ birthday, in addition to cutting the cake and presenting it to his photograph, everyone wished him a happy birthday, a long and healthy life, as well as best wishes for his quick recovery from Covid-19.

One thought on “On Shrikant Tyagi’s birthday, hundreds of workers descended on the Camp office in Modinagar”