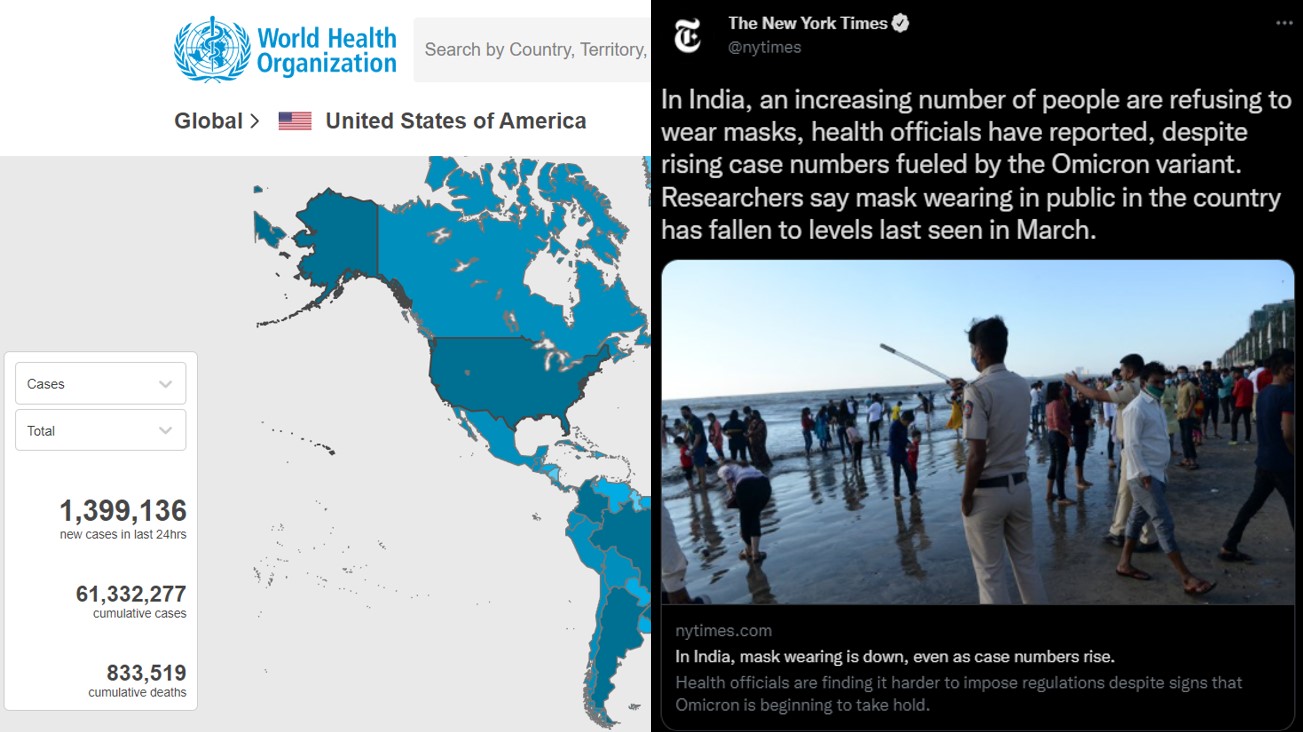 New York Times’ unhealthy obsession with India and Prime Minister Modi does not seem to end anytime soon. With their own country (USA) registering over a million cases a day, they are now virtue signalling by worrying about India.

On 10th January (2022), New York Times (NYT) published a report on declining mask-wearing culture in India. The title itself seemed to insinuate that India is in a bad state with respect to handling the pandemic.

The news report has been penned by some Sameer Yasir. The report starts by stating India’s increasing number of Omicron infections.  According to the report, people in India call masks a sign of weakness as well as unhelpful in preventing infection. It cites certain health officer of West Bengal as evidence for it.

Actually, there are not many Indians calling masks a sign of weakness. It’s actually a western concept which the columnist tried to impose on India. In fact, Middlesex University and Mathematical Science Research in California have researched this phenomenon.

Moreover, majority of Indians are vaccinated now. Modi government’s vaccination drive has made it possible for Indians to feel secure about the virus’ threat.  Contrary to western nations who are facing civil unrest due to imposed vaccinations, Indians have willingly taken vaccines to ensure their and their family members’ safety.

Sameer then proceeds to explain the details of India after the second Covid wave. Without citing specific research, the columnist claims that mask-wearing in India has fallen to 10 months low.

The report then proceeds to criticize Indian Politicians for their specific rallies. It firstly describes PM Modi’s suggestions and Kejriwal’s authoritarian curfew to stop the virus.  However, the columnist then condemns them by saying that they both have held rallies for upcoming elections.

As a matter of fact, there are plans of holding E-rallies for elections.

The columnist then cherry-picks a few incidents of anti-mask incidents; in effect presenting a bad picture of India’s overall Covid scenario. Moreover, he also cites India’s Omicron cases to present that Indians are not serious about countering the virus.

Lectures India while the US is bleeding

Frankly, the article seems to be a clear attempt to transfer the west’s liability onto India. The outrage against masks and vaccines in the west is so much that both are now becoming election issues. Biden administration is now resorting to authoritarian measures to curb this problem.

Moreover, the US is now registering over million cases per day. These include both vaccinated and unvaccinated. Clearly, vaccination has not been successful in the USA. It would be better if NYT decides to clear the vaccinations concepts of the anti-vaxers brigade in the US with their detailed research-based investigative journalism. India and Indians are doing fine under Prime Minister Modi.

Dear NYT, please follow Jordan Peterson’s advice.  Clean Your Room before you set out to criticise the world and especially India.