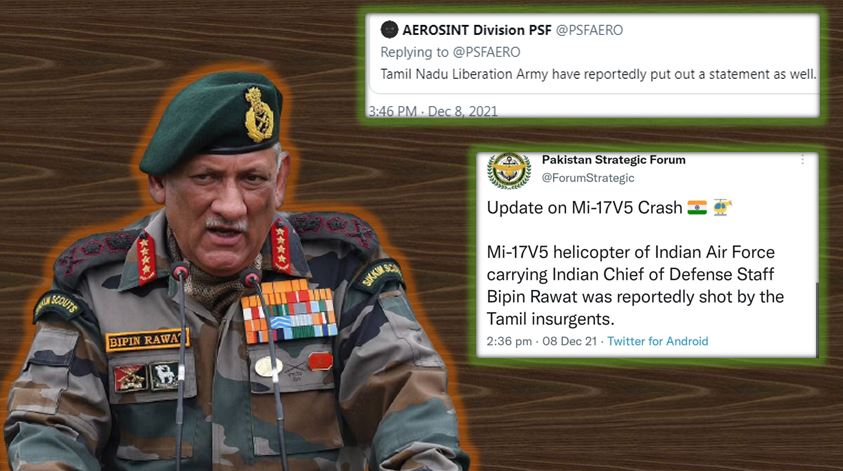 Chief of Defence Staff (CDS) Bipin Singh Rawat, along with his wife and 11 other senior armed forces officials, died in a freak helicopter crash on Wednesday. While Pakistani social media handles rejoiced at the death of their nightmare aka CDS Bipin Rawat Ji, some tried to stoke Tamil separatism by falsely blaming the crash on Tamil insurgents.

Pakistani accounts are milking this situation to claim that Tamil insurgents were behind the crash. This is purely fake news coming from the land of terrorism. Don’t fall for it https://t.co/gnMT6hBx3N

While the Pakistani bot account claimed that the insurgent outfits released the statements, nowhere the supposed ‘statement’ was put out in the tweet thread.

The handle didn’t stop here and further claimed, “Tamil insurgent group LTTE alongside Maoist Freedom Fighters as well as the Isaak-Muivah faction of the National Socialist Council of Nagaland (NSCN-IM) may be involved.”

Weaving lies to misdirect the public and probe agencies:

The handle was supposedly weaving a web of lies so that the dormant outfits could cash in on the opportunity and reignite themselves. Or perhaps some naive individual could forge the identity of the insurgent group to misdirect the government agencies probing the cause of the crash.

The Pakistani handles trying to falsely peddle their agenda should understand that no insurgent group is currently active in South India, especially Tamil Nādu.

As for the northeastern states, CDS Bipin Rawat had been a living, breathing menace for the terror groups there, all throughout his career. They couldn’t touch him when he raided their territories, so the question of them planning such an elaborate operation appears a rather distant reality.

Prior to becoming Chief of Army Staff in 2016, Gen. Rawat was commanding the Dimapur-based 3 Corps when a surgical strike was carried out on June 10, 2015, in retaliation for an ambush in Manipur, when 18 soldiers of 6 Dogra battalion were killed by Myanmar-based NSCN-K terrorists.

Within 5 days, Rawat planned the attacks, briefed the soldiers, trained them, and sent them across the border, deep into the enemy territory. Such was the waterproof planning by Rawat, that the soldiers inflicted heavy damage upon the terrorists, killing over 100, while not a single casualty was reported on the Indian side.

As the general, he planned the surgical strikes and showed what efficient leadership at the top looks like. His actions have set the template for future Army Generals and CDS.

General Bipin Singh Rawat, took charge as India’s first CDS in January 2019. The position was set up with the aim of integrating the three services – the Army, the Navy, and the Air Force – and he was an automatic and obvious choice.  After his sudden demise, the government has announced his successor would be picked soon.