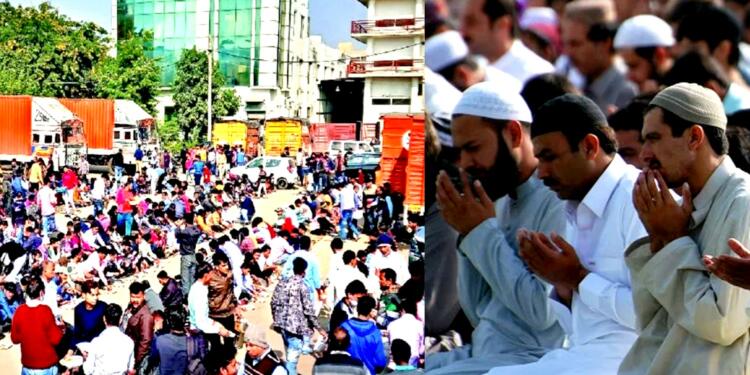 Months long dispute between Hindus and Muslims in Gurugram seems to be increasing day by day. At the root of all such problems are hundreds of Muslims assembling every Friday at public places in Gurugram to offer Namaz ignoring the trouble faced by locals. Hindu activists along with the locals protested in every way possible to retaliate against the stubbornness of Namazis who are hardly concerned about the inconvenience caused to the people residing around the controversial site. After several failed attempts to stop Muslims from offering namaz at public places, Hindus have now resorted to Bhandara and Kirtan.

It was last week when Gurugram Hindus had issued an ultimatum to Muslims to stop offering namaz from December 10 onwards. Despite the warning, the Namazis gathered again at the protest site to offer Namaz. Interestingly, the Hindu activists who have left no stone unturned to prevent the offering of Namaz at the controversial park came up with an innovative way to stop the Namazis this Friday.

In such a move, a group of right-wing activists and locals organised ‘Kirtan’ and ‘Bhandara’ at the site on Friday. Bereft of any way to offer Namaz, Muslims had to leave empty-handed.

After the warning was issued to Muslims last week, members of right-wing outfits had reached the objected namaz sites in Sector 37, Atlas Chowk, Sector 44, Sirhaul Park, Sector 22, and Genpact Park to chant religious slogans, as per the police. Muslims had claimed that they could not perform namaz at any site despite the presence of the police.

Earlier this week, Haryana chief minister Manohar Lal Khattar had also looked into the matter and said that offering namaz in public places cannot be tolerated. While interacting with the media, he had said, “Such programmes (namaz) should not be held in the open. This practice of offering namaz at public spaces will not be tolerated as it is leading to controversies and confrontations. We have given directions to the police and administration to resolve the issue amicably. We will not allow any confrontation, and try to resolve it.”

Shedding the blanket of one-sided morality imposed on Hindus, they have taken the whole matter into their hands as the police do not seem to be supportive of them. The Hindus of Gurugram have taken matters into their own hands, and some activists spread cow dung cakes on the ground at Gurugram’s Sector 12A, which prevented the Muslims from offering their Friday prayers there.

Ever since the row in Gurugram began more than a month ago, the number of sites designated for Namaz has come down from 37 to 6 now, indicating that the efforts of Hindus are bearing fruits.

Considering the efforts by Hindu activists and locals, it can be speculated that these efforts will continue until Muslims stop offering Namaz at public places.